Home2022 Woman of Distinction – Kimberly Litsheim
A- A A+

Captain Kimberly Litsheim has been an accomplished member of the Rock County Sheriff’s Office for the past 19 years. Throughout her career, she continued her education and obtained a Master’s Degree in Emergency Management and she completed the Northwestern University School of Police Staff and Command. Her continued dedication to the profession has resulted in numerous promotions at the Rock County Sheriff’s Office. Kimberly has worked her way through the ranks starting her career as a Correctional Officer. She spent time as a Deputy Sheriff, Sergeant with the jail and patrol divisions, and was promoted in December 2019 to Captain and is now the Assistant jail Administrator.

Kimberly has been recognized for her commitment to the community receiving several awards to include three Sheriff’s Office Lifesaving awards, two commendations, and most recently she was awarded the 2021 Retired Sheriff’s Leadership Award. 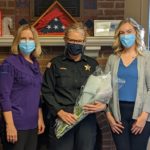