Marking 100 years of the 19th Amendment

August 18, 2020 marks 100 years of the 19th amendment, which granted women the right to vote. While the amendment was ratified on August 18, the fight began much earlier. 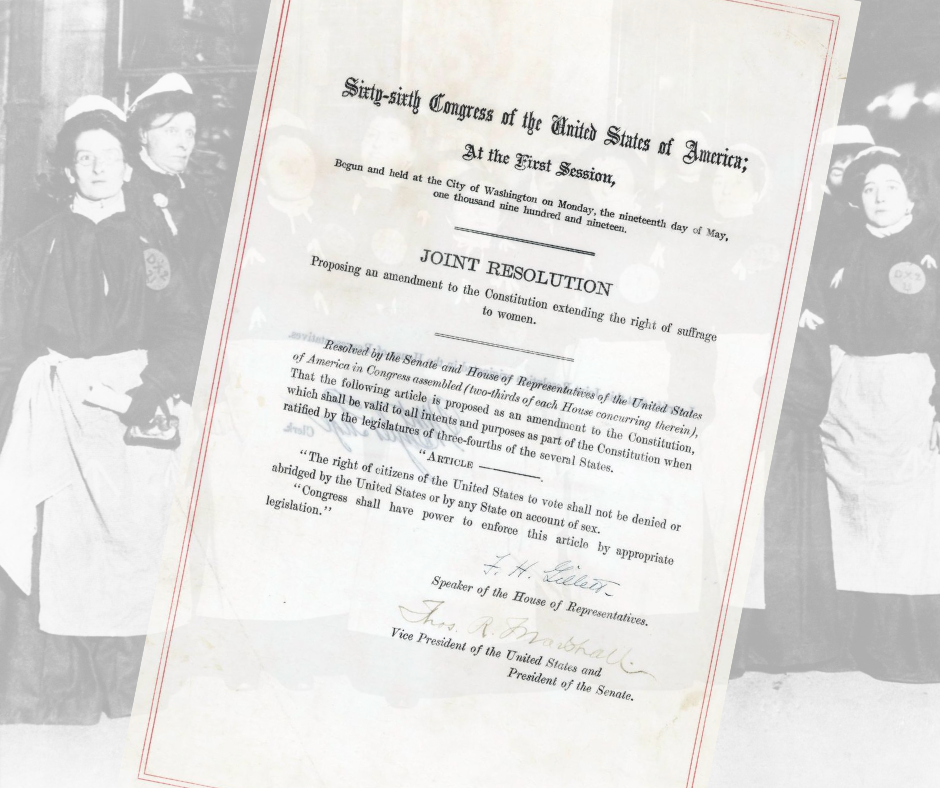 On July 19-20, 1848, the movement for women’s rights was introduced on the national stage at the Wesleyan Chapel in Seneca Falls, New York during the two-day Woman’s Rights Convention with almost 200 women in attendance. The first day was for women only but approximately 40 men, including Frederick Douglass were in attendance for the second day to witness the adoption of the “Declaration of Sentiments and Grievances” – written by Elizabeth Cady Stanton.

The time between the formal introduction of the Suffrage Movement to the ratification of the 19th Amendment spanned 72 years and included an important partnership with the Abolitionist Movement.

On March 3, 1913 the Women’s Suffrage Procession in Washington D.C. was strategically held one day before the inauguration of President-elect Woodrow Wilson. Parade organizers invited more than 5,000 participants from around the country to march down Pennsylvania Avenue. The official program stated “March in a spirit of protest against the present political organization of society, from which women are excluded.”

Almost 50 black women from Delaware, Illinois, Michigan, and New York, as well as Washington D.C participated in the procession. Many people credit Nellie M. Quander, an educator and the first international president of the Alpha Kappa Alpha Sorority, with the participation of women from Washington, D.C. It is reported that 25 young women from Howard University marched in caps and gowns. Those brave women were members of Delta Sigma Theta Sorority. Educator and Oberlin College graduate, Mary Church Terrell and Ida B. Wells, a journalist well-known for her anti-lynching crusade in the 1890s also participated in the procession. Mary Church Terrell was forced to march at the rear of the parade with the other black marchers while Ida B. Wells refused to march at the back. She reportedly waited until the parade began and joined in with the Chicago delegation composed of white women.

Marching against the status quo was difficult for white women, but it was even more complicated and dangerous for black women because of the added burden of their intersectionality of race and gender. Many white suffragists who did not favor suffrage for black women were concerned that they could not maintain support from white southern women while fully including black women in the campaign.

“Even after the adoption of the 19th Amendment, many black women remain disenfranchised for another four plus decades. The 19th Amendment did not prevent literacy test, poll taxes and the unspeakable violence and death that was so often associated with the attempt to register or exercise the right to vote.

While I celebrate this incredible milestone I am simultaneously remembering, with much gratitude and admiration, the sacrifice of black women who continued the fight past August 18, 1920 in order to exercise their right to vote.”

Transform lives through education and action